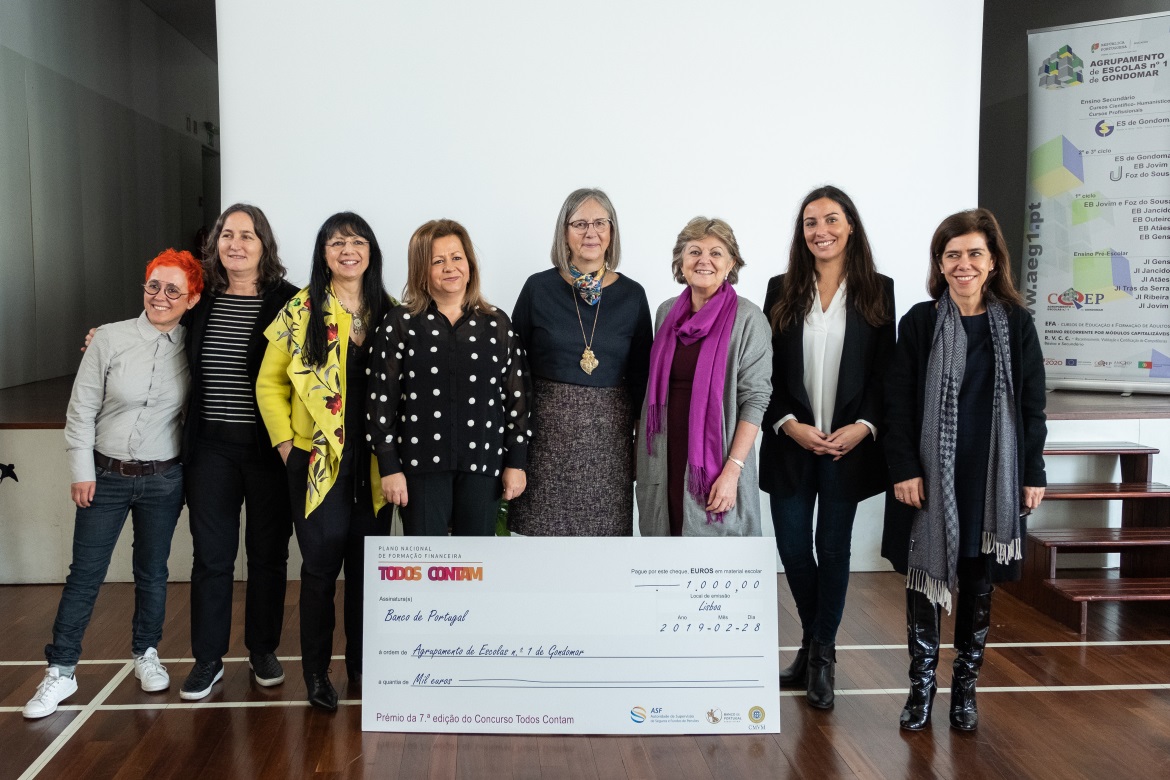 Jovim, a small town in the city of Gondomar, is where the winning school in the 7th Todos Contam competition (3rd stage of basic education category) is based. Actually, this is a replay for the school as the winner of the annual competition awarded by financial supervisors to the best financial education projects in the country. “Sometimes, a repeat is not a bad thing,” quipped Fernanda Santos, Math teacher and head of the project awarded by the National Council of Financial Supervisors and the Ministry of Education.

Escola Básica de Jovim e Foz do Sousa entered for the first time in the Todos Contam competition in the 2017/18 school year. As this was their first year, they didn’t expect to win, but ended up being considered the best of all the schools competing in the 3rd stage of basic education category. A now duplicated feat.

On 28 February the Todos Contam competition award was presented to the school by Elisa Ferreira, Vice-Governor of Banco de Portugal, during a session attended by Lúcia Leitão, Chair of the National Plan for Financial Education’s Coordination Committee, and representatives from the Insurance and Pension Funds Supervisory Authority, the Portuguese Securities Market Commission and the Directorate-General for Education.

With the support of the Head of Agrupamento de Escolas n.º 1 de Gondomar, Fernanda Santos successfully mobilised students, parents and teachers for a series of initiatives aiming to raise awareness in the community to the importance of saving and informed consumption. Among other activities, the project included the celebration of World Savings Day, Buy Nothing Day, Gondo_Fin Day (the student-created project mascot) and the participation in the Global Money Week, which is the best-known international financial literacy campaign, coordinated by the Child and Youth Finance International.

“It moves me deeply to see such a rich community, with incredibly engaged teachers and parents who take such an active part in a project. (…) One and all have gone well beyond their regular duties. They have outdone themselves,” praised Elisa Ferreira, Vice-Governor of Banco de Portugal at the award ceremony, held at Escola Secundária de Gondomar.

In this session, Elisa Ferreira explained that supervisory work is important for financial institutions to refrain from reneging their commitments to their customers, but this is not enough: citizens must have the necessary financial knowledge to identify the risks to which they are exposed. For this reason, supervisors are also determined to foster financial know-how among the population, by giving support to the schools intending to work in this area.

In this respect, the Vice-Governor recalled the financial education campaign launched by Banco de Portugal at the beginning of the school year – the “#toptip campaign – which explains how young people may safely use digital channels (computers, tablets and smartphones), thus guarding against financial fraud and over-indebtedness. “These are the issues that come up in our day-to-day life. This everyday life sounds so much easier, but, for non-informed, non-aware and unmindful citizens, situations may come along limiting our lives for many years ahead and, sometimes, forever,” recapped Elisa Ferreira.

About the Todos Contam competition

The Todos Contam Competition rewards the best financial education projects developed by Portuguese schools every year. It is an initiative of the National Council of Financial Supervisors (Banco de Portugal, Portuguese Securities Market Commission and Portuguese Insurance and Pension Funds Supervisory Authority) and of the Ministry of Education, through the Directorate-General for Education and the National Agency for Qualification and Vocational Education and Training.

The 7th edition of the Todos Contam Competition appraised 53 applications from 91 schools of the majority of the districts in mainland Portugal as well as from the Madeira Autonomous Region, involving over ten thousand students.