The National Council of Financial Supervisors (CNSF) held its Annual General Meeting on 13 March with the entities that are on the National Plan for Financial Education Monitoring Committee. At the meeting that took place at Banco de Portugal, the Plan’s partners presented the activities they aim to carry out in 2019 and disclosed the Annual Report 2018 (Portuguese only).

The 8th Todos Contam Competition will be launched in the first half of 2019 and shall, for the first time, award the teacher that stands out the most in implementing the financial education projects, the “Todos Contam Teacher Award”.

Regional financial training remains a priority in the Plan, under the protocol signed between the financial supervisors and the Northern Regional Coordination and Development Committee (CCDR-N). In 2019, a new cooperation agreement is to be signed with the Intermunicipal Community of Trás-os-Montes, which will be added to the older partnerships with the intermunicipal communities of Tâmega e Sousa and of Alto Tâmega.

The financial supervisors are also going to start work on the 3rd Survey on the Financial Literacy of the Portuguese Population, scheduled to take place at the beginning of 2020, allowing Portugal to participate in an international exercise for measuring and comparing financial literacy undertaken by OECD/INFE – International Network on Financial Education.

These and other initiatives will be described in greater detail in the Plan’s Activities Schedule for 2019, to be disclosed in due course by the National Council of Financial Supervisors.

At the meeting with the Monitoring Committee, the National Council of Financial Supervisors stressed its partners’ importance in increasing the footprint of the initiatives in the National Plan for Financial Education and to multiply financial training actions for target audiences. The Council also spoke of the crucial role the media could play in disseminating financial literacy information so that it can reach more people.

The meeting was chaired by Carlos da Silva Costa, Governor of Banco de Portugal and Chair of the CNSF, and was attended by the other members of the CNSF, Elisa Ferreira, Vice-Governor of Banco de Portugal, José Figueiredo Almaça, Chair of the Portuguese Insurance and Pension Funds Supervisory Authority (ASF), and Gabriela Figueiredo Dias, Chair of the Portuguese Securities Market Commission (CMVM). Filomena Oliveira, Vice-Chair of CMVM, also participated in the meeting.

Also present were the representatives of the 26 entities on the Plan’s Monitoring Committee and the judges of the Todos Contam competition. 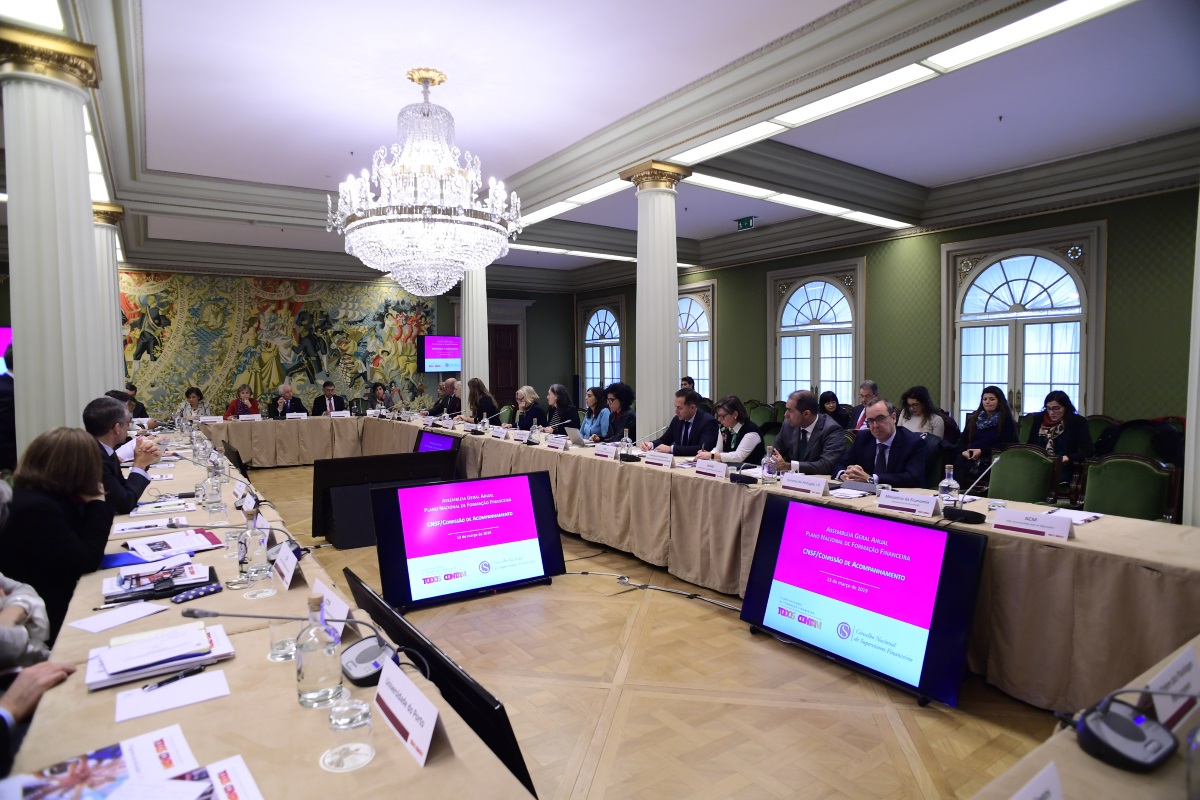 The National Plan for Financial Education in 2018

The year 2018 was marked by the establishment of new strategic partnerships that broadened its scope to include new audiences.

The CNSF and the Portuguese Institute for Employment and Vocational Training (IEFP) signed a Cooperation Agreement to promote financial literacy in vocational training under the National Plan for Financial Education. The first two IEFP train-the-trainer courses were held in 2018, in Lisbon and Porto, for a total of 40 trainers.

Also in 2018 the CNSF and the Portuguese Association of Psychologists (OPP) signed a cooperation protocol under the Plan to promote financial training in regard to attitudes and behaviours. An awareness course for educational and school psychologists was hosted during the 2018 Financial Literacy Week.

The existing relationship with Cooperativa António Sérgio para a Economia Social (CASES) was strengthened by an Addendum to the Cooperation Protocol signed in 2015. In 2018 and for the first time, a representative of the CNSF was on the jury of the António Sérgio Cooperation and Solidarity Award.

With regard to financial education in schools, the new Financial Education Workbook 3 was published for students from the 3rd stage of basic education. The teachers’ training programme proceeded with the completion of a training workshop in Lisbon (Olivais) and a training course in Pombal. Schools were encouraged to develop financial education projects to compete in the 7th Todos Contam Competition, in 2018.

The Financial Literacy Week took place from 29 October to 2 November 2018, with the motto Na Formação Financeira Todos Contam! (Everybody Counts in Financial Training). The Plan’s various partners all joined the Week helping to ensure widespread coverage of different target audiences.

Entities that are members of the Monitoring Committee and took part in the meeting:

UP - Universidade do Porto